Cheetah Chrome, guitarist with Cleveland punk legends the Dead Boys and Rocket from the Tombs, to release ‘Solo’ EP to coincide with ‘CBGB’ movie 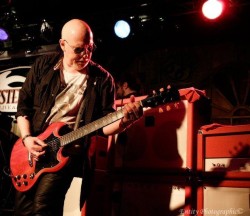 (FROM CLEVELAND.COM) Cheetah Chrome — – the mad, guitar genius behind 1970s Cleveland punk legends the Dead Boys and Rocket from the Tombs — has been recording and touring for almost four decades. He’s been a bandmate and a bandleader, a session man and record-label executive, and he’s documented his wild live shows in concert recordings such as “Alive in Detroit.” But the 58-year-old Chrome has never released a studio collection of solo material.

That odd hole in his musical resume will be filled soon with “Solo,” a 7-song EP of tunes from two recording sessions — one from 1996 led by Dead Boys’ producer Genya Ravan and another from 2010 featuring the New York Dolls’ Sylvain Sylvain.

“Solo” will be released Oct. 8 on Nashville’s Plowboy Records. It is timed to coincide with the October premiere of the film, “CBGB,” Hollywood’s upcoming look at the New York punk scene and the famed concert club that was its home base.

Chrome is portrayed in the film by “Harry Potter” regular Rupert Grint, and makes a cameo as a taxi driver.

Read the rest of the article here at Cleveland.com!