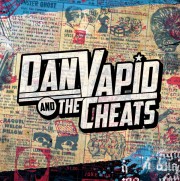 from DyingScene.com – Dan Vapid and The Cheats have finished tracking their second full-length at Atlas Studios. The 14 songs were recorded by Matt Allison and Justin Yates and the record will be mixed later this month by Matt Allison. While no release date has been set, the band is looking to release the record sometime in July on Torture Chamber Records. The band is also playing Insubordination Festival this year as well some upcoming dates with ex-Leftover’s frontman Kurt Baker. Dates can be found here.

Dan Vapid and the Cheats released their debut, self titled album in October, 2011 and you can stream/purchase it on their bandcamp page.