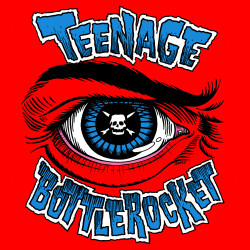 Here we have the complete discography of Teenage Bottlerocket that consists of everything ever recorded that includes all LP’s, 7”s, split 7”s , Compilations and unreleased material.

This 8xLP set is limited to only 1000 sets and they are all individually numbered.
Every LP has exclusive artwork that will only be available in this box set, every LP is colored vinyl and every jacket is dye cut. The records are housed in a VERY sturdy box.

Below are the highlights of what you will find contained in this set:
• Another Way- Re-mixed and re-mastered which makes all other pressings of this record obsolete.
• Total- Re-mastered
• Warning Device- Re-mastered
• Live in 06- Re-mixed and re-mastered and is now two sides instead of only one side as originally released for 248 copies in 2009 and sounds soooo much better.
• Freak Out- Re-mastered
• They Came From the Shadows- Re-mastered
• BONUS- 2xLP with all of their singles, split 7’s, comp songs and unreleased material and it was all re-mastered and now they’re the quality you expect from TBR. The last side to this 2XLP even has brand new mixes of TBR’s first 7” (A-Bomb) it almost sounds like it was recorded yesterday.

The people who order this set between the dates of August 26th and September 9th will have the chance to snag 1 of the 100 copies of this box set that’s come to be known as a tie dye set. The tie dye sets come with the variances of an exclusive slip case that the entire box set comes in, exclusive to 100 lyric book, a limited to this release poster that was drawn by Chris Shary as well as autographed by Chris and the entire band and last but not least, the bonus LP’s (the double LP that has all the non-normal LP releases) will be pressed on a kick ass tie dye vinyl.