The Tombstones: Twang From the Grave Vol. 2 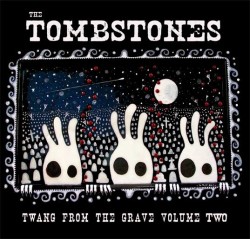 (From Rock N Roll Manifesto – click here for post)
1986, Atlanta, Georgia: a three piece acoustic band called Tombstone Tales forms. Before long they add a fourth member, plug in their instruments and become the Tombstones. By 1988, they had released a demo tape, “Grave Matter,” and a 7-song mini LP, “Preachin’ Prayin’ Guitar Playin’.” “Preachin’ Prayin’” achieved minor indie success, and the Tombstones shared the stage with bands such as the Stray Cats, the Ramones, the Circle Jerks and the Lords of the New Church. Unfortunately, they never released anything else, despite signing with Sony/Relativity and recording an as-of-yet-unreleased album for them, along with quite a few other recording sessions along the way. By the mid 90′s, the Tombstones were still going but were a completely different band other than Stevie, and by 1995 or 96, Stevie decided to end the Tombstones and go out on his own.

By the time I first heard the Tombstones, their reign of terror was nearly over. It was around 1995, on a “psychobilly” mix tape made by a friend of a friend. I still remember hearing “Tombstone Tales” for the first time. Their music was haunting, and it intrigued me. They somehow simultaneously fit in with the rest of the psychobilly on the tape and yet stuck out like a sore thumb. Not long after, I stumbled across the “Preachin’ Prayin’ Guitar Playin’” LP at a record convention and I was hooked. It quickly became a favorite of mine, and it also became clear to me that this was not psychobilly. It was cut from a different cloth and uniquely American. It was roots oriented, steeped in rockabilly, blues and country, but with a darkness and a punk rock attitude and fire. I loved it. The LP was dated 1988. Surely, there had to be more where this came from? I searched feverishly for more information on this band.

Back then the Internet wasn’t what it is now. Searches on the Tombstones turned up nothing. I once bought a 7″ single at a record convention by a band called the Tombstones, but to my dismay it turned out to be a completely different (and horribly inferior) band. A few years later I met up with a guy from Georgia who not only knew of and liked the Tombstones, but said he had a tape of unreleased stuff. Where do I sign up? He sent it to me and I was blown away, but the mystery only deepened. What happened to this great band? Nobody seemed to know. I continued to search the interwebs for years and came up blank.

Fast forward to 2002- The Tombstones were a huge influence on my band at the time. We had been covering the Tombstones classic, “Jailhouse Tattoo,” at our gigs and ended up recording it. To be able to release our record with the song included, we needed to somehow find out where to send a royalty check. Further frantic Internet searches in early 2003 finally turned up an article about Stevie Tombstone, whom apparently was doing solo work now. I emailed the author of the article and asked if he could put me in contact with Stevie, which he did.

You never know what you’ll get when you actually communicate with someone who’s music you admire. There’s nothing worse than when one of your musical influences turns out to be a total asshole. Thankfully, talking to Stevie was the complete opposite of that. He was nice enough to talk to me for quite a while on the phone and share the story of the Tombstones. He was very humble and seemed genuinely grateful that anyone would like one of the Tombstones songs enough to want to record and release it on their album. We’ve kept in touch ever since.

In 2006, Stevie took a reformed version of the Tombstones out on the road to support the release of the original “Twang From the Grave” compilation. Thankfully, I got to see them on that tour when they hit New York City, and they were just as amazing as I hoped they would be. Stevie invited me up on stage to sing Jailhouse Tattoo with them. I was so nervous I messed up the words, but it was a blast. I’ll never forget it.

The Tombstones are one of my all-time favorite bands, so I’m excited these songs are finally getting a proper release. The songs on this particular album are some of the earliest recordings the Tombstones did, and also the very last recordings that were made during the brief Tombstones reformation of 2005-7. There’s even a version of “Til the Day I Die” recorded live on the Rock N Roll Manifesto! With this release and the original Twang From the Grave, the picture of the legacy of the Tombstones is becoming clearer, and the world is a better place for it.

Unfortunately, Stevie still refuses to release the Sony album. Some of my favorite Tombstones songs are on there, so I bug him about it all the time. With any luck, someday there will be a Twang From the Grave Volume 3…

Twang From the Grave Vol. 2 is available now via iTunes. Click here to buy it.