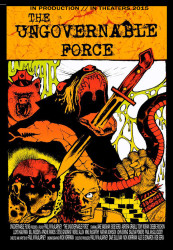 PUNK is a force to be reckoned with in The Ungovernable Force, a grindhouse film where punks and bums unite against fascist cops!!!

“A New Movie… About A New Generation”

It’s 2014: forty years have passed since the Ramones first played CBGB; thirty-nine since John Lydon joined the Sex Pistols; thirty-six years ago Steve Ignorant claimed that punk was dead and three years later Wattie claimed it wasn’t; thirty-two years ago Class of 1984 was released and thirty years ago it was Suburbia. Now it’s The Ungovernable Force, showcasing the subculture and its oft-misunderstood opportunistic nihilism and basic humanistic ethics over sanctity and conformity.