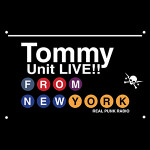 September 28, 2016. Tonight we scoped out the upcoming album 20th Century Eyes from NYC’s Ca$h Registers! Mark, their bass player, joined me in the studio along with Justin, from The Jones Kings, and Mike, from Live Ones! All 3 bands, plus Admit Nothing, will be playing the record release show this Saturday at Hank’s … Continue reading Tommy Unit LIVE!! #295 – Ca$h Registers “20th Century Eyes” →