Hang on to Your Wallets and Listen to the First Song from Masked Intruder’s New Album!! 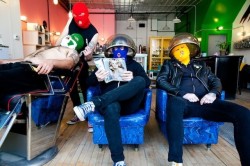 Just two years ago, the punk scene dropped the proverbial soap and got a tender, uh… introduction to the band of ex-cons known as Masked Intruder. The four ski mask-clad criminals broke out of prison and into everywhere’s hearts with their perfectly crafted self-titled album. Spending your days in the slammer must give you time to practice guitar riffs because the record was a flawless masterpiece of heart-on-sleeve pop punk, start to finish.

After several tours and countless near-run-ins with the law, Masked Intruder is back with a new album, M.I., out May 27 on Fat Wreck Chords. (From what the Intruders tell us, Fat Mike has some pretty nice stuff at his house. Or at least he used to before he let the band in.) You can listen to the first song off of it, “The Most Beautiful Girl”, in which the band seems to have gotten a lot less stalkery and a lot more, dare we say it, mature? Have they been making those mandatory visits to their parole officers after all?

Watch the video here
Order it here
On Tour here