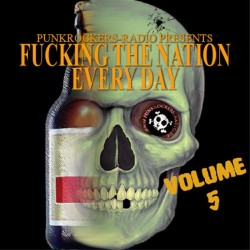 (FROM PUNKROCKERS-RADIO.DE) Punk still is not dead. With the fifth edition of “Fucking The Nation Every Day” under our belt, we’ve found more than a hundred bands from all over the world who have ties to punk rock, more or less. And that’s just the tip of the iceberg. Because out there, many, many more bands are waiting to be discovered while they rehearse in basements, garages and bunkers until their fingers bleed, just to play their asses off at a run-down club in front of an audience of five. Let’s face it: None of them will probably ever become the next big thing. Certainly not by being on this compilation. But that’s not the point. The point is doing what you like, making the kind of music that you burn for, and knowing that all over the world, there are people who feel the same. So: Stay punk – and support those bands whose hearts beat for punk rock.